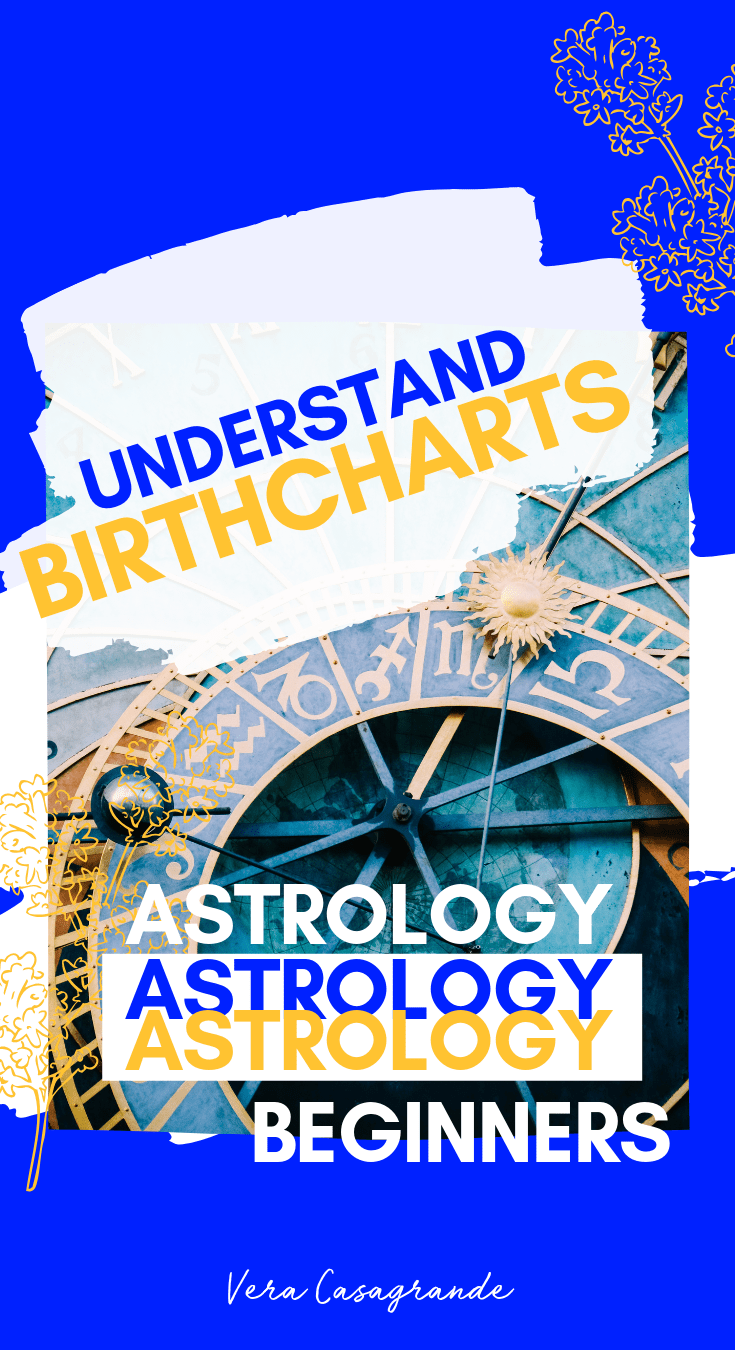 Astrology can be a tricky topic. The terminology can be confusing for any beginner. Over the weekend, I had the pleasure of hearing Alize Kelly give a super insightful talk! Her insight has been built over years of study of mythology and space. She serves numerous outlets and magazines with her cosmic chat! Her take on complex cosmology — a symbolic bond between the universe and existence— gave valuable insight and inspiration into Astrology for any beginner. By decoding the Astrological Chart, you can manifest meaningful transformation.

She has read birth charts for hundreds of people, including a few of your favorite celebs. I take it she knows a thing or two.

How to Understand your Astrological Birth Chart (Natal Chart)

Personal Placements in your Chart

With Astrology you deepen your understanding of others as well as yourself. This insight fuels empathy, kindness and compassion across your relationships.

In our chart, personal placements can help us think about what’s affecting us in our day to day.

So, What does my birth chart mean?

Your rising sign is the planetary influence which was rising when you were born. It typically reflects how you appear to others and can be somewhat of a “mask you wear”.  It is, also, what you let the outside world see of yourself. It can be the general impression you give off.

So when people ask you, “What is your sign?”, typically, they’re talking about the Sun sign.  For those beginners to understanding astrology, these are your essential qualities, your self image, and how you define the world.

There are twelve Sun signs, each with its own character traits, inclinations, leanings or motivations. The sun sign blends with the rest of your planets to form your unique, one-of-a-kind astrological blueprint. And this is why someone may not always “seem like an Pisces.” This is a good place to start when just beginning to learn about astrology.

Your star (or sun) sign represents which sign the sun was in when you were born. The earth takes 30-31 days to change signs as it orbits around the sun, so you share your sun sign with everyone born in that month-long time span.

Understanding Astrology can mean the sun sign dictates the brush strokes of your personality or your outer self.

One of the most important pieces of your astrological chart is your moon sign (where the moon was when you were born).

It colors all the subconscious stuff going on below the surface meaning your deepest needs. True soulmates and kindred spirit share compatible moon signs. Check out your moon sign and theirs.

A moon sign helps you feel emotionally secure and reveals the real you. This is the private person inside that you know yourself to be. The moon only stays in each sign for around two days, so it’s a much more variable aspect of your birth chart.

It largely explains why you are so different to the other people you know who share your sun sign. Your moon sign reflects the intense emotions, fears, longings and obsessions bubbling below the surface of your sun sign-driven persona.

It impacts heavily upon your relationships and bonds with others.

Mercury is on its own neutral. Mercury doesn’t have an opinion or a perspective, it works with the other energies to deliver the messages.

So we can see here, sometimes the moon and Mercury are in the same sign. Fabulous, right? This provides an easy one to one between how you feel and what you say. Sometimes the sun and Mercury are in the same time frame, you have an easy energy between how you want to come across what your vessel is, and how you’re communicating your ego and your expression.

But sometimes Mercury is doing a whole other different thing to these planets. In those cases, we could think that maybe Mercury is like, you know, you feel misunderstood, or you feel like mercury is doing something where you’re wondering, why?

“Why do I always act so aggressively? When I don’t feel that aggressive? Why do I feel like I’m so much softer internally?”

Yet, on the inside, you’re a Virgo Moon, which is much more thoughtful and analytical, Mercury being hot. Here it is. So Mercury, is a very important placement because we live in a very Mercurial world where we rely on communication and language and dialogue a lot.

Next up, we have Venus.

Venus is responsible for our value systems.

Venus is responsible for what we love and what we appreciate. When first understanding astrology, I like to think of Venus as like first date energy. If you were being taken out on your perfect first date, this is what Venus is going to want to do.

For example, maybe your Venus is in Scorpio and you’re being drawn to these like elusive and mysterious people.

“I want to crack them like we went on a date And they didn’t say anything? Like, how cool is that.”

Or then your Venus is in Gemini. And what makes you happy is communication and dialogue and being in the know. So sometimes we can see the tension between these energies as being something that we need to make sure are each doing their own thing.

So we don’t think of our Venus as a long term solution. It’s how we want to see something in a moment.

Lastly, we have Mars. We don’t get to see Mars that often in our charts, because we’re not like, waging war on people. However, Mars is about aggression and determination.

If you were to get into a fight, then your Mars is coming out.

If you are racing to meet a deadline, your Mars is coming out.

If you when you’re trying to have sex your Mars is coming out.

If Mars is an Aries, it’s like, I just love to do the thing. I want to turn my test in first I want to win and want to be first I love competition. If Mars is in Virgo, maybe it’s a little more analytical and likes to edit and it likes to be meticulous. Perhaps Mars in Leo desires attention and wants to be seen. It doesn’t want to be an anonymous donor who’s not getting affirmation on their contributions.

Next, the outer placements. They don’t move as quickly as the personal ones do. So you’re going to see these on a generational level.

Meaning, anyone born within one year of you, is likely going to have the same Jupiter as you because Jupiter stays in a sign for about a year.

But again, our sort of ticket into Jupiter is going to be found in the personal placements, we’re going to get more information of how that works on a day to day level through those.

Saturn is where we feel like we need to create responsibilities to create structure and create order.

It is it stays in a sign for about two and a half years. So people born within two and a half years of you are likely going to have the same Saturn. People who are born right now between 1988, 1989 & 1990 a little bit in 1991 are all going through their Saturn return because all of these people have Saturn in Capricorn.

As a generation people are moving into that next generation is going to be Saturn and Aquarius, all of these people are going to have their Saturn return upcoming a Saturn return is when these planets move back into the position that they were at their exact time of birth of your birth. Asolar return, which is your birthday is when the sun does that 360 orbit and comes back to you. Saturn takes 28 and a half years but does that orbit and comes back home. So we know what a return is based on how long these planets orbits are.

People born within seven years are going to have the same Uranus as you. So it’s less personal and more generational.

Uranus takes 84 years to do a full orbit, so it’s not going to come back home until you’re 84 years old. So for those of you who know the Instagram account, Baddie Winkle, who is this very, very cool, 84 year old woman, who wears outfits, I could not pull off. She just had her Uranus return.

She’s a great example of what happens hopefully, if you make it to your mid early 80s. And you’re like, fuck it, I’m going to start my life over again and do crazy things and have fun and be myself because that is how you’re innovated and how you’re progressing.

Neptune we’re not going to see a full Neptune orbit in this lifetime. It takes now 240 years to come into a full orbit. People born within the same Neptune as you It ranges anywhere from 10 to 20 years of Neptune sticks around for a very long time it has been in Pisces, for like nine years at this point is a very slow moving placement and planet.

Neptune is going to show us where we have our subconscious strengths, our psychic skills, the way that we dream.

Pluto is the really the last major one. In astrology, we still call it a planet.

Pluto is the last planet that we really talk about actively.

Pluto is the planet of transformation and destruction and totally reinventing systems. Pluto is where we’re going to see where we want to destroy things transgress them.

Been back to you guys is that it takes Pluto 284 years to make an orbit. And the United States is first Pluto return is going to be happening in 2020. So that blows my mind What An interesting thing. I talked about this actually quite a lot because this you know different practitioners in astrology or in Tarot, or in any sort of the mystical spaces see this in their own interpretations of the world too.

I saying you know what is what Pluto Scorpio generation is doing is to me to movement. It’s saying I’m going to show all of the messed up things that have happened in society relating to sex and power abuses for so long. That’s Pluto in Scorpio.

Some of you guys might have Pluto and Libra. The way that you’re transforming things is by rethinking what peace means.  It is a generation who is either going at things very aggressively or going at things diplomatically.

Lastly, Chiron is a very far out a celestial body, it’s actually a comet.

Chiron is going to show us a deep wound that we have – something very much embedded within our chart as a pain, and then that pain becomes strength.

So when understanding astrology and your Chiron’s placement, again, is generational people within seven years are going to have it. It’s going to show you where you feel like I just was lacking in that. But now the more that I work it, the more that I can give it back.

So, if Chiron is in cancer, maybe you didn’t feel like you were given enough love or nurturing as a child. Now, perhaps that’s one of your strengths; to be a nurturer. If you Chiron is in Gemini, perhaps you’ve felt that you really had a chance to be in center stage. I always felt like I had to like manage somebody else and sort of navigate me and another person.

Understanding Astrology in your Day to Day

This timely insight provided by Aliza Kelly comes just before Mercury which will be in retrograde this summer! Understanding Astrology doesn’t have to be hard when you take some time to read charts and practice knowing yourself. If inspirational quotes are more of your thing have a look at some more posts.  Looking for  a full chart? I use astro.com